Does Bama Earn Title #5 since 2009, or Does the UnderDawgs Run Away With It

Jan 8 is a day that the UGA football fan base has been waiting patiently for for close to 40 years.  Their insatiable desire to claim another College Football Championship and first Playoff National Title.  Private Eye Limo who services the Metro Atlanta area were able to drive a group of diehard Georgia, and Atlanta sports fans in general, to Mercedes Benz Stadium to enjoy a historic event that appears to be the final pit stop to a historic season for these Dawg faithful.  Tim Dawson, we had the pleasure of bringing to the game in one of our H2 Hummer Limos, explained to his wife in order to justify his UGA football travel expenses on four different road game situations that, “this is a once in a lifetime event.”

I think when the schedule came out a few years ago, the Red and Black faithful circled the Notre Dame game as a chance to witness a iconic venue with Touchdown Jesus looming in the background.  What they were also treated to was the emergence of a star freshman QB in Jake Fromm and the catch of the year to win the game against the Golden Domers.  Dawson, and his crew of UGA fans, embarked on this trip, took in the game and also hung around for the Falcons vs Bears game and Braves vs Cubs.  A true Atlanta weekend in Illinois.

From this first game, they passed the baton onto the Auburn road trip to witness the first clash between emerging Auburn Tigers and the undefeated #1 in the nation Bulldogs.  the 8-0 Dawgs were thoroughly wipped as they had over 40 points dropped on them while in Jordan-Hare leading many to speculate that the moment was just too big for them  Like any good champ, they took the loss in stride, pocketed some of the bulletin board material that Coach Gus Malzhan gave them, and waited like championship teams do with a business like approach to dispatching their last few games including their ACC Rivals Georgia Tech on the road to avenge a previous season loss. 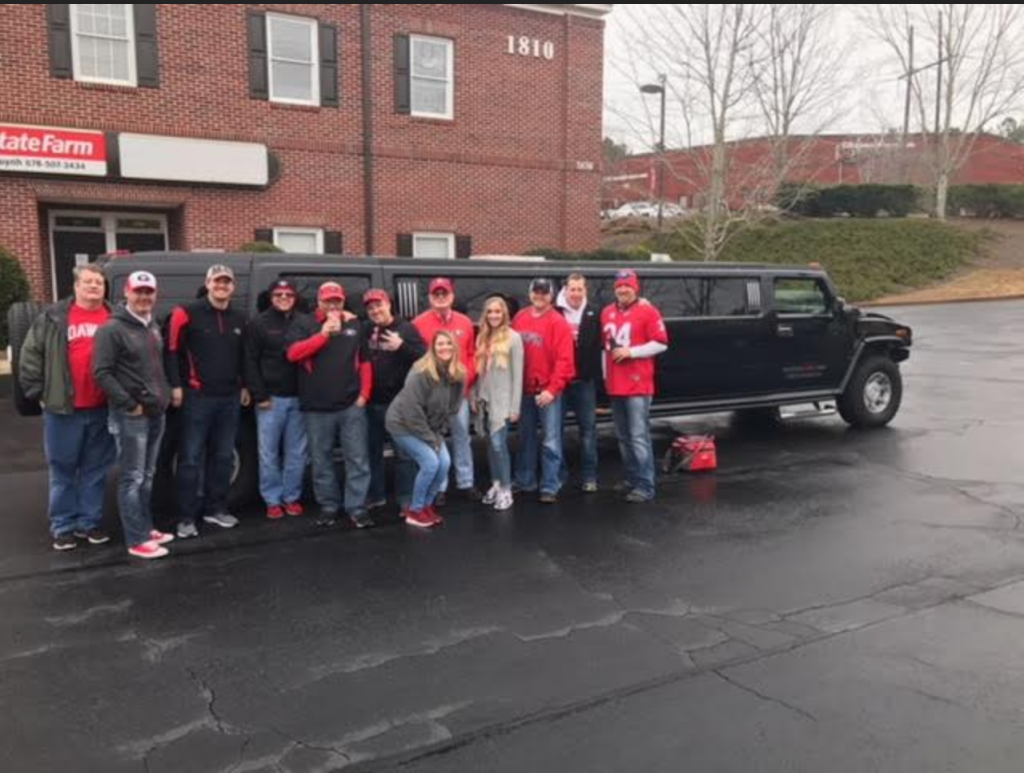 All that stood in the way of the Dawgs and a chance at their first College Football Playoff appearance was the Auburn Tigers.  With the memories of the domination at Jordan Hare fresh in their psyche, the Bulldogs were able to contain a worn down Auburn running attack and make their first year QB try to beat them.  It was the Bulldogs first opportunity to play in Mercedes Benz Stadium and it would not be their last.

As a result of extracting revenge, the playoff system sent them packing to Pasadena with a epic clash against the Heisman winner, Baker Mayfield, and the Oklahoma Sooners.  The crew in the limo went to their respective wives and explained the importance of the trip and how it was necessary for them to be there.  Again, a once and a lifetime opportunity.  This game did not disappoint as the Georgia faithful endured a brutal first half but were granted a bit of new life after a 55 yard fg before half.  From there they exerted their will and running attack and claimed victory in double overtime.  It was time to ask the wives for one more favor.  Favor granted.

This time they did not have to purchase a plane ticket, but rather a first class ride to the stadium in a Private Eye Limo, as they all pitched in, grabbed their tailgating essentials and made sure to ride safely.  The group felt cautiously optimistic as they waited patiently in the rain to enter the stadium and make their way to their seats.  To the surprise of most, Georgia dominated the first half as Alabama was stymied offensively and missed a Field Goal after a false start.

With Alabama needing a spark, they turned to their own 5 star true freshman and he delivered a once in a lifetime performance, setting up a game winning Fg in regulation that happened to fall astray leaving the Georgia faithful to let out a collective sigh of relief.  With new life, the Dawgs kicked a 51 yard fg and a short time later sacked the five star for a 16 yard loss.  Cool and composed like a five year NFL vet, the Alabama backup hurled a 40 yard laser to a streaking receiver down the sideline, sending the UGA fans home reflecting on a great season and what could have been, as 26-23 turned to out to be the final.

All is not lost for the UGA clan as they have staked claim to the top recruiting class in the nation and a sense of belonging in the national discussion for future titles.  The future is bright and we look forward to giving more UGA fans a life.